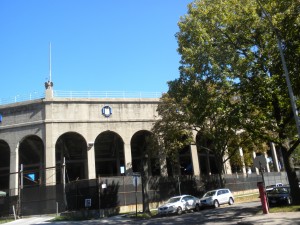 The forest Hills Tennis Stadium, currently under threat from developers.

Forest Hills in Queens is an affluent community which has long been desirable real estate for developers who want to build there.  Conflict arises though when developers come in and demolish some of the community’s older historic structures to make way for new developments.  Lately Cord Meyer Development Company has been trying to purchase and demolish the community’s most prestigious icon: the 14,000-seat Forest Hills Tennis Stadium, the former home of the US tennis open, which is owned by the West Side Tennis Club.   Michael Perlman is President of the Forest-Rego Preservation Council and fights to save local landmarks from greedy developer’s bulldozers, and I spoke with him recently about this struggle.

Q:  Cord Meyer has a lot of history in Forest Hills, there’s a whole section of the neighborhood named after the company.  Why do you think a company that’s such a part of the community here, and has such history here, wants to tear down the community’s most renowned monument?

A: I was reading on a local blog that the people who originated Cord Meyer development were all within a close knit family, it was a family corporation.  And now generations passed on and the last family member has wound up getting out of the business.  In essence, they may have the same name but they have different ideals: 2010 lego ideals.

Q:  I heard in one of the blogs that Cord Meyer said that their offer [for the tennis stadium] is still on the table.

A: I think that Kenneth Parker [President of the West Side Tennis Club] and the club’s board member’s November 15th deadline for a new proposal for the stadium is really an offer to Cord Meyer.

Q: Cord Meyer is obviously one example of a larger problem which is that Forest Hills is a really nice neighborhood where want to buy land,  but when they don’t always adhere to the community’s desires.  What are some examples of this?

A: Relating to 72nd Avenue between Austin St. and Queens Blvd., there are neo-Renaissance row houses on opposites sides of the street.  Four of these have been demolished in recent years by one developer one by one. Some interests, mostly from outside Forest Hills, it’s a shame they don’t want to work with our community closer and respect the history here.   Another example, not of developers, but is the tenant of the former Trylon movie theater.  In 2005 I remember walking by and seeing jackhammers smashing its mosaic tiles.  Now it’s just another banal box.  It really reduces property values.

Q: What do you think should be done to make developers respect the community and look at the greater picture?

A: I feel that communities that have a sense of place should be commemorated with historic district status, and those communities should be subject to the Landmark’s Law.  Everything would the be subject to a public hearing to take into account the majority of the citizens.

This entry was posted in Uncategorized. Bookmark the permalink.